Is It Soup Yet?

Once upon a time, I was terrified of soup.

Not of eating it, of course, but of making it.  I don't know why, but the idea of preparing something that amounted to essentially boiling tons of water and making it taste delicious was daunting.

Ah, how times have changed.

First of all, I learned the true secret of soup- do not boil tons of water.  You will ruin the soup.

Soup isn't actually water with stuff in it.  It's a bunch of stuff that you add water to.  Do you see the difference?

Briefly, this is how you construct a soup, sans meat things:

So it turned out, soup was easy.

Really, soup is like a very wet stir fry.  In the fall, it is a fabulous way to get improvisational and creative in the kitchen.  And everybody loves a big bowl of soup on a cool autumn evening.  Maybe even with a hunk of fresh bread to go with it.

Here are a few of tips I've uncovered for getting the. best. soups. 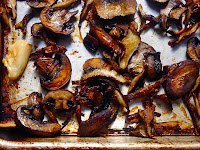 1. To get the best flavor out of your mushrooms, roast them in the oven for about ten minutes before you chop them up.  I never have this kind of foresight, so I recommend just taking your mushrooms and roasting them as soon as you get home from the store.  They'll store pretty well post-roast if you stick them in the freezer.

I love mushroom soup, but it always felt like I had to add a million mushrooms to get a strong enough flavor.  But roasted mushrooms?  Perfection.

Mushrooms aren't the only vegetable that this is the case for.  Asparagus, tomatoes, lima beans, and peppers can also benefit from a brief roasting.

2. Seaweed is your soup's best friend.  Sound crazy?  I thought so too, when my mom taught me this one.

One thing that meat eaters frequently complain about when it comes to vegetarian soups is that they don't taste hearty enough- that there's something about a meat-free soup that isn't satisfying.  The reason for that is a type of taste that the Japanese call "umami."  It's that meaty flavor- that fill-up-your-whole-mouth flavor.  It's not sweet, it's not sour, it's not savory... it's umami.  And you can count on a culture that can name the mouth-feel of a kind of flavor to come up with ways to sate the need.

I recommend keeping a package of sushi nori seaweed in your pantry.  First of all, sushi can be a fun, quick, and diverse meal- so long as you've got that seaweed to hold it all together.  But secondly, that seaweed?  It's delicious.  And it's umami.  If your soup seems a little lacking, you can just throw a whole sheet in, and essentially let it dissolve.  And your soup will become instantly more umami. 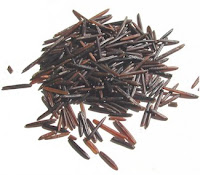 3. Learn your starches.  Potatoes and rice and noodles are all excellent in soups, but not all potatoes, rice, or noodles are the same.  Take the time to think about how much time you have to make your soup, what the overall texture of your soup should be, and how thick you want your broth.  A waxier potato, like a Yukon Gold, will make your soup creamier than something like a russet.  Large rotini noodles might soak up a lot of your broth and turn your soup into a hearty stew (though there's nothing wrong with that!), rice that is overcooked can become mushy.

I've found that the best rice for soups is wild rice, because it's thicker husk maintains the flavor and consistency best when left in a pot of liquid for long periods of time.

4. Go totally overboard on your seasonings.  You know what you do if your soup is too strong?  You add water.  And then suddenly, you have more soup.  And what do you do with extra soup?  Stick it in the freezer.  Soup freezes really, really well, and it's as simple as dumping your soup-cube into a pot to turn it back into soup.

5. Broth powder.  So you've made a delicious sort of a stir fry in your pot, and you've added water, and the flavor is just... a little lacking?  Broth powder.  I'm a big fan of Osem, which makes an excellent vegetarian broth powder, but you can get any variety that you like.  You don't need to use nearly as much as you have liquid- you've half made your broth with the seasonings you've put in and with your vegetables- but some broth powder (to taste) can really finish the job well.

6. Get thee an immersion blender.  It's also called a stick blender.  It's a tiny blender, on a stick, that you immerse in your soup.  That way, you can turn a broth-and-solids soup into a creamed soup without having to transfer scalding liquid into your blender caraffe- which sucks.  Some vegetables that turn unbelievably creamy and delicious are chick peas and cauliflower.

Don't be afraid, like I was.  Soups aren't scary.  And best of all, they are flexible and forgiving.  Too salty?  Add a halved potato- that'll absorb it.  Then you can remove the potato and toss it/save it for some awesome mashed potatoes.  Too bland?  Broth mix!  Too flavorful?  More water!  Too thick?  More water!  Not quite savory enough?  Seaweed!

Becoming Supermommy
There's an ancient Chinese curse I once heard, "May you have an interesting life." It's possible that instead of simply hearing it, I was actually being smitten. My life has been, in a word, interesting. Once a Renaissance Woman with a pot in every fire, I now try to keep myself content to be merely a mother of three under three, a gourmet chef, a master painter, and a fashion designer, and finally completing my bachelor's degree. You can find me filling my few free moments by blogging here about such topics as child rearing, cooking, keeping my thumb green, maintaining a dual-religion family life, keeping us all healthy despite unending obstacles, and generally trying to be a modern day Bohemian Donna Reed.